Thank you for Unlocking the Festival Handbook 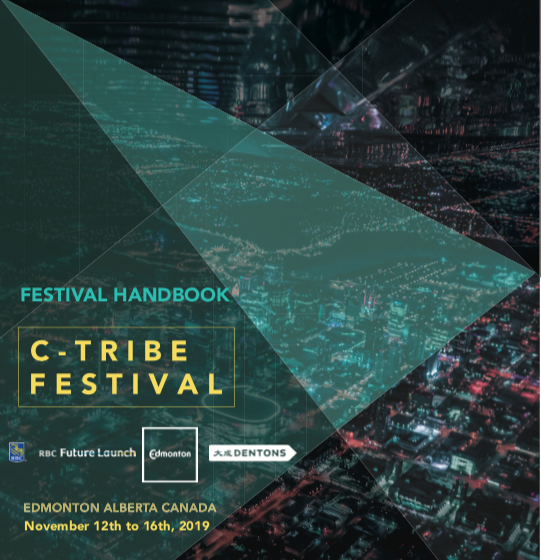 Announcing official dates and schedule for the C-Tribe Festival: A five-day collision festival set to showcase the best of the Canadian creative and innovation ecosystem in nation’s northernmost metropolitan city, Edmonton.

Edmonton, Canada, November 12 to 16, 2019 –Canadian innovation and creativity will be on full display at this year’s C-Tribe Festival: a five-day collision festival which celebrates the best of the national tech and creativity ecosystem.

View the photos from the latest Media + Influencer Launch here.

The Youthful Cities Canadian Urban Work Index funded by RBC Future Launch listed Edmonton as the #1 city for youth to live; ranking high in affordability, entrepreneurial spirit, and economic opportunities. Vice President for Corporate Citizenship at RBC, Valerie Chort says RBC Future Launch is a decade-long commitment to helping Canadian youth prepare for the jobs of tomorrow.”We are committed to acting as a catalyst for change, bringing government, educators, public sector and not-for-profits together to co-create solutions to help young people better prepare for the future of the work through “human skills” development, networking, work experience, and mental wellbeing supports.”

More than 1500 attendees will flock to the host city of Edmonton, Alberta for the immersive programming. The festival programme is further broken down into three categories, with an aim to demonstrate how the intersection of culture, innovation, and creativity can result in actionable solutions to the challenges of our times.

Alberta has been an artificial intelligence leader for more than a decade, with Google AI subsidiary DeepMind fulfilling their first international office in Edmonton. This is yet another indicator that the city is an emerging hub for ideas, talent and opportunities – and the ideal host for C-Tribe Festival.

Festival founder and chairperson Sahr Saffa said the festival acts as fertile ground for ideas and collaborations. “We already live in a world of collisions. A world where two seemingly opposing concepts could be molded into one and transformed into new and re-imagined industries. Collisions break down barriers between ideas, points of view, and create new grounds that we can explore and build upon together. Edmonton is an emerging innovation and creative hub, it’s punching above its weight on a global level, and we believe it’s the perfect time to continue to spotlight the next generation of business leaders, artists, innovators, and creators” he said.

“I’ve been very blessed to go to conferences or I see world leaders, thought leaders, authors etc., and there’s just so much that I learned and I just think to myself “it would be so cool if I could share these ideas with people.” It’s kind of like what TED Talks does. For daily life what I really want to do is to build a platform and what we’ve built there — but where I can go find some of the best authors in the world and just say, “Hey, I would like for you to create a product or a mini-series with us” or do whatever I can do so that the average human doesn’t have to spend copious amounts of money like I have to learn these things.

This is coming from having a very privileged life: I’m white, I’m male, I grew up in Canada so I haven’t had a lot of horrible heartbreak or things happen to me. Personally I think that life is a lot easier than we are taught it should be. I think people take pride in life being a struggle and hang their hat on things being hard. Life is really whatever you decide it to be. Your thoughts create your reality. Whatever you tell yourself is what will be. I have always wanted life to be easy, I wanted it to be light, enjoyable and fun and I’ve made it so because I believed in that.”
Bio
Founded in 2010 by Daniel Matishak, Mindable is one of the most exciting digital publishing companies in the personal transformation space.

Mindable invested in an idea that they were passionate about and grew from a basement operation, to being ranked one of the top 2,000 websites (https://astrologyanswers.com/) in the world (ranked by Alexa.com). Mindable was voted as one of the fastest growing tech companies in 2015 (Deloitte), coming in at #14 of the Top 50 in Canada, and #122 of the Top 500 in North America!

How have they pulled this off? One strategy that has paid off is a mostly remote workforce, that enables the company to attract top talent not just from their own backyard, but from across the globe.There are, of course, challenges that come with a dispersed team like Mindable’s. Namely – how do you maintain the right culture when more than half your staff never sets foot in the office?

Over the years Mindable has had the opportunity to tap into some of the most interesting markets and as we have mentioned, we’ve found our success and passion publishing authors, articles and products in the self-discovery and personal transformation space. This massive market grants Mindable a digital playground to publish content, test new ideas and connect with a valuable network of unique individuals.

This episode is brought to you by the C-Tribe Festival. C-Tribe re-imagines the festival experience with the goal of bringing together innovative and creative people and proactive thinkers. By integrating a business conference with music performances, trendy fashion shows, intimate roundtable discussions, culinary experiences, wellness sessions, and artistic activations.C-Tribe curates inspiring environments that help catalyze action.

This episode is also brought to you by AutonomIQ: leveraging AI to remove the biggest bottleneck when building software. Without getting too technical, AutonomIQ teaches computers and algorithms to test your software so that your most expensive engineering talent doesn’t have to. 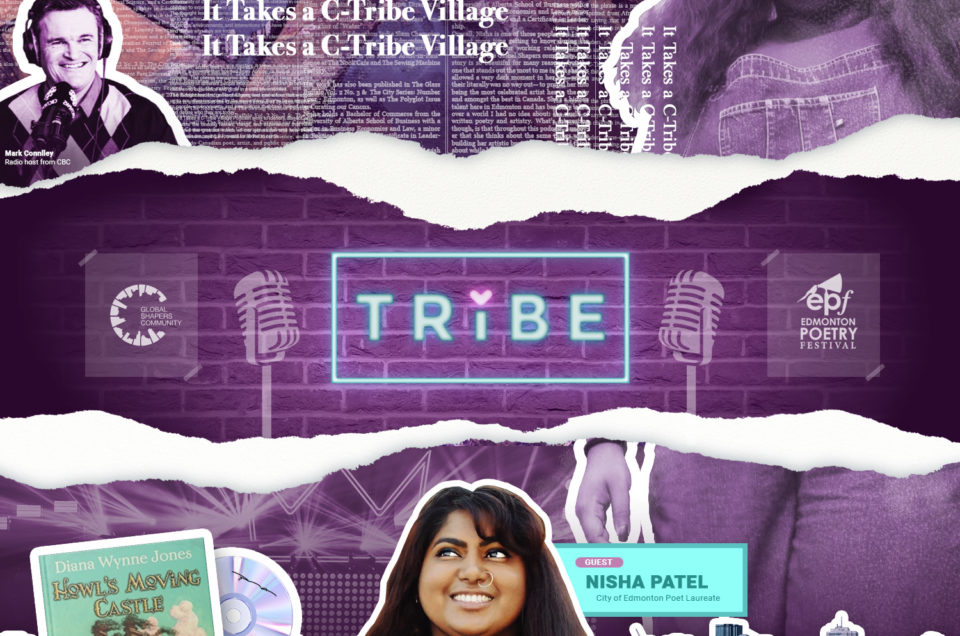 “Eventually I reached a point where I was like, “you know what, I want to see what happens if I pursue this full time.” I’m not sure what will happen and I don’t know if I can pursue this full time, but you hear about people in their retirement years, or you hear from Millennials, “oh, I want to write a book one day”, or “I want to travel the world when I retire”, or “I want to do this when I retire.” I don’t want to live a life waiting for retirement, I want to try things now. Either I can spend this money when I’m 67 (or whenever the retirement age is) or I can use all of my savings to see what it takes to be a full time artist and do what I want for a year. My year was up a few months ago, but I think I’m doing pretty well right now to buy myself a little bit of time as an artist.
Bio
Nisha (@anothernisha) is an Indo-Canadian poet, artist, and public speaker in Edmonton, Alberta. She is the current Poet Laureate for the City of Edmonton. She is also the 2019 Canadian Individual Slam Champion, the 2019 Edmonton Slam Champion, and the Executive Director of the Edmonton Poetry Festival.
She is the author of “Limited Success” and co-author of “Water“. She is the 2016 Edmonton Indie Slam Champion and a four-time member of the Edmonton Slam Team. She is a finalist of the Canadian Festival of Spoken Word. She is the former Artist-in-Residence at The Nook Cafe and The Sewing Machine Factory.
Her work has also been published in The Glass Buffalo Vol. 2 No. 3 &  The City Series: Number Four – Edmonton, as well as The Polyglot Issue 3: Curating our Canons.
Nisha holds a Bachelor of Commerce from the University of Alberta School of Business with a major in Business Economics and Law, a minor in Political Science, and a Certificate in Leadership.
Overall, Nisha, is one of those people that I wish I spent more time getting to know during the earlier parts of our working relationship as members of the Global Shapers community. Her story is so beautiful for many reasons, but the one that stands out the most to me is that she has allowed a very dark moment in her life—where their literally was no way out— to propel her into being the most celebrated artist her in the city and amongst the best in Canada. She’s a hidden talent here in Edmonton and has basically taken over a world I had no idea about: the world of written poetry and artistry. What’s interesting though, is that throughout this podcast, I uncover that she thinks about the same things while building her artistic business that I would think about while building a tech business.

This episode is brought to you by the C-Tribe Festival. C-Tribe re-imagines the festival experience with the goal of bringing together innovative and creative people and proactive thinkers. By integrating a business conference with music performances, trendy fashion shows, intimate roundtable discussions, culinary experiences, wellness sessions, and artistic activations.C-Tribe curates inspiring environments that help catalyze action.

This episode is also brought to you by AutonomIQ: leveraging AI to remove the biggest bottleneck when building software. Without getting too technical, AutonomIQ teaches computers and algorithms to test your software so that your most expensive engineering talent doesn’t have to.